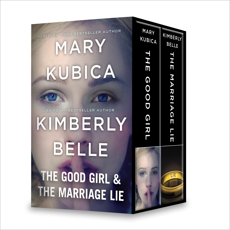 The Good Girl & The Marriage Lie: An Anthology

“I’ve been following her for the past few days. I know where she buys her groceries, where she has her dry cleaning done, where she works. I don’t know the color of her eyes or what they look like when she’s scared. But I will.”

One night, Mia Dennett enters a bar to meet her on-again, off-again boyfriend. But when he doesn’t show, she unwisely leaves with an enigmatic stranger. At first Colin Thatcher seems like a safe one-night stand. But following Colin home will turn out to be the worst mistake of Mia’s life...

Everyone has secrets… Iris and Will have been married for seven years, and life is as close to perfect as it can be. But on the morning Will flies out for a business trip to Florida, Iris’s happy world comes to an abrupt halt: another plane headed for Seattle has crashed into a field, killing everyone on board and, according to the airline, Will was one of the passengers. Why did Will lie about where he was going? And what else has he lied about? As Iris sets off on a desperate quest to uncover what her husband was keeping from her, the answers she finds shock her to her very core.

First published as THE GOOD GIRL by MIRA in 2014

First published as THE MARRIAGE LIE by MIRA in 2017