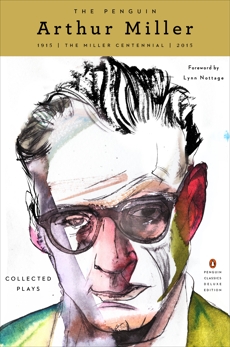 Synopsis: To celebrate the centennial of his birth, the collected plays of America’s greatest twentieth-century dramatist in a beautiful bespoke hardcover edition

In the history of postwar American art and politics, Arthur Miller casts a long shadow as a playwright of stunning range and power whose works held up a mirror to America and its shifting values. The Penguin Arthur Miller celebrates Miller’s creative and intellectual legacy by bringing together the breadth of his plays, which span the decades from the 1930s to the new millennium. From his quiet debut, The Man Who Had All the Luck, and All My Sons, the follow-up that established him as a major talent, to career hallmarks like The Crucible and Death of a Salesman, and later works like Mr. Peters’ Connections and Resurrection Blues, the range and courage of Miller’s moral and artistic vision are here on full display.

This lavish bespoke edition, specially produced to commemorate the Miller centennial, is a must-have for devotees of Miller’s work. The Penguin Arthur Miller will ensure a permanent place on any bookshelf for the full span of Miller’s extraordinary dramatic career.

The Penguin Arthur Miller includes: The Man Who Had All the Luck, All My Sons, Death of a Salesman, An Enemy of the People, The Crucible, A View from the Bridge, After the Fall, Incident at Vichy, The Price, The Creation of the World and Other Business, The Archbishop’s Ceiling, The American Clock, Playing for Time, The Ride Down Mt. Morgan, The Last Yankee, Broken Glass, Mr. Peters’ Connections, and Resurrection Blues.