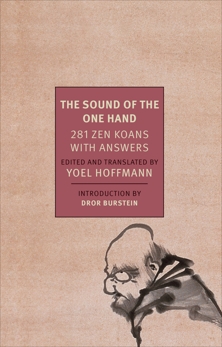 The Sound of the One Hand: 281 Zen Koans with Answers

Synopsis: When The Sound of the One Hand came out in Japan in 1916 it caused a scandal. Zen was a secretive practice, its wisdom relayed from master to novice in strictest privacy. That a handbook existed recording not only the riddling koans that are central to Zen teaching but also detailing the answers to them seemed to mark Zen as rote, not revelatory.

For all that, The Sound of the One Hand opens the door to Zen like no other book. Including koans that go back to the master who first brought the koan teaching method from China to Japan in the eighteenth century, this book offers, in the words of the translator, editor, and Zen initiate Yoel Hoffmann, “the clearest, most detailed, and most correct picture of Zen” that can be found. What we have here is an extraordinary introduction to Zen thought as lived thought, a treasury of problems, paradoxes, and performance that will appeal to artists, writers, and philosophers as well as Buddhists and students of religion.