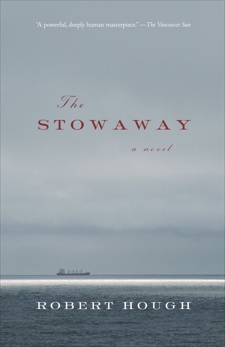 Synopsis: The Stowaway is at once a thrilling maritime adventure and a thought-provoking morality tale based on real-life events. The novel begins in the spring of 1996 when Rodolfo Miguel, a bosun on the Taiwanese container ship Maersk Dubai, discovers a hungry and frightened pair of Romanian stowaways. He presents them to his officers, fully expecting that they’ll be put to work or else dropped off at the nearest port. Instead, he and his fellow Filipino crewmen watch in silent horror as the Romanians are cast overboard in a flimsy raft only to disappear beneath the ship’s wake.

The Stowaway moves seamlessly between two storylines. Aboard the Maersk Dubai, Rodolfo and his crewmen must deal with the emotional trauma of what they’ve seen – as well as grapple with how to act on what they know. The atmosphere on the ship grows increasingly tense as fear, anxiety and paranoia grip the Filipino sailors. Trapped witnesses to a crime, they wonder whom they can trust and whether they themselves will meet with the same fate as the stowaways.

Meanwhile, a nineteen-year-old Romanian named Daniel Pacepa heads out on a nail-biting adventure from Bucharest to Algeciras. Poor, brave and full of youthful indiscretion, Daniel is desperate to stow away on a ship and head to a better life in America. Along the way, he meets another Romanian named Gheorghe and together they perform cheap labour, pose as evangelical Christians and do whatever it takes to find their way to the Spanish port of Algeciras.

Eventually the two stories merge when Daniel and Gheorghe sneak onto the ill-fated Maersk Dubai. One man is killed, the other discovered by Rodolfo. Once again, the Filipino crewmen find themselves faced with an excruciating moral dilemma. Do they risk their own personal safety to save the life of a complete stranger?

All of the scenes involving the Filipino sailors are as close to the truth as Robert Hough could manage based on exhaustive interviews with the crewmen as well as on their letters and journals. Though Hough invented the Romanians’ land adventure, he based the story on considerable research, including interviews with Romanian-Canadians who had lived under the Ceausescu regime.

Hough was widely praised for the deft way in which he mixes fact and fiction in The Stowaway. The critics were also unanimous in their admiration for the novel’s ability to seduce with suspense while at the same time posing profound issues for the reader to ponder. “This is a powerful novel that artfully combines the vivid, breathless pacing of the best adventure stories with the moral and metaphysical depth of the best literary fiction,” said Quill & Quire. And from the Vancouver Sun: “Harnessing the force of fiction and the weight of history, Hough has created a powerful, deeply human masterpiece out of tragedy and inhumanity.”