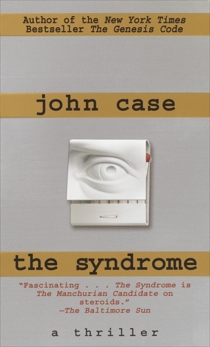 The Syndrome: A Thriller

Synopsis: A promising research fellow for a venerable think tank in Zurich has just filed his last report, as he is forced into a grisly experiment. . . . A seductive young woman travels to Florida and, from her hotel room window, coolly sharpshoots an old man in a wheelchair as he basks in the late afternoon sun. . . . A psychologist who helps patients confront and dispel past trauma through hypnosis battles his own silent demons. . . .  In The Syndrome, John Case combines these intriguing elements into a pulse-pounding, mind-twisting new thriller.

Dr. Jeff Duran suffers from severe panic attacks when he ventures too far outside his home office. At times, he remembers phrases of a foreign language he has never learned. And there are curious memories he cannot explain of distinct smells, music, the spray of ocean sailing. But no sooner do these senses and images begin to surface than they disappear.

Then, after a patient commits suicide, Duran's life spirals out of control. The victim's half-sister, Adrienne Cope, blames Duran for filling her sister's head with "recovered" memories of horrific childhood abuse. But Adrienne soon discovers some shocking facts about him--facts that even he is unaware of.

The stakes are raised when unknown assassins burst into Duran's office and bloodshed ensues. But who is their target: Adrienne or Duran? Running for their very lives, forced to trust each other, they must now work together to unlock the reason why one or both of them is marked for death. For beneath the intrigue lies a dark conspiracy that stretches halfway around the world-- and a sinister plot that could change the course of history.

A relentlessly paced thriller in which nothing is what it seems, no one can be trusted, and nothing is secure--especially one's own memories.  The Syndrome is a chillingly, brilliantly conceived novel from a proven master of suspense.