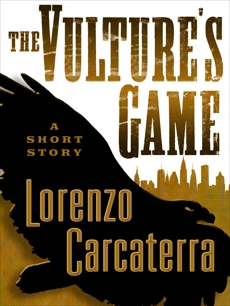 Synopsis: In The Wolf, #1 New York Times bestselling author Lorenzo Carcaterra introduces readers to Vincent Marelli, his most stunning and captivating hero yet. But, in this eBook original prequel short story, before Marelli becomes the world’s most powerful mob boss, he must prove he has what it takes to lead the pack.

My name is Vincent Marelli, and when I was a young man life gave me a choice: play by the rules . . . or play to win. You might say I chose well, because today I am the don of all dons, commanding the biggest, most successful organized crime operation in the world. But all that I have—everything I won—I got by working harder, thinking smarter, and fighting better than the rest. This is the story of how I started. How my uncle gave me a job to do and turned me loose in the big, bad world he’d already conquered. And how I took on the man who tried to take on the wrong people—my people. I won’t say what happened. You can find out for yourself. Let’s just say that killing your enemy is easy, but there are better ways to get revenge. And the best revenge is a gift that keeps on giving.

Advance praise for The Wolf

“Lorenzo Carcaterra is one of the my favorite writers in the world, and The Wolf is his best book yet. In it you’ll meet the superbly crafted crime boss Vincent Marelli—and then you’ll spend this riveting read trying to decide whether Marelli, like Michael Corleone, is a hero or a villain. Pick up a copy of The Wolf and you won’t put it down until the surprise ending!”—Lisa Scottoline, New York Times bestselling author of Accused

“The Wolf crackles with the geopolitical high stakes of Homeland, the intrigue and lore of The Godfather, and the clock-ticking final showdown of 24. No one combines such themes as Renaissance art, global terror, and all things Italian like Lorenzo Carcaterra.”—Andrew Gross, New York Times bestselling author of Everything to Lose

“Crackles with action . . . a riveting and ingenious read that will keep you turning the pages.”—Douglas Preston, on Midnight Angels

“A powerful read . . . with plenty of action and dialogue as authentic as the streets of New York.”—St. Petersburg Times, on Paradise City

“A brilliant, multilayered novel that breathes and bleeds on every page. This book transcends the genre of crime fiction. It is a full-blooded novel and an epic read.”—Robert Crais, on Gangster