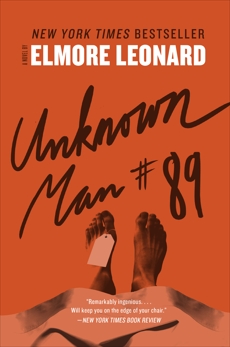 “No one is Leonard’s equal,” declares the Chicago Tribune—and anyone who might doubt it would only have to read Elmore Leonard’s riveting noir classic, Unknown Man #89, to become a true believer.

The twisty tale of a Detroit process server whose search for a missing stockholder leads him into more serious peril than he ever imagined possible, Unknown Man #89 is a gourmet stew of mystery, suspense, and double and triple cross, peppered with the razor sharp dialogue for which Grand Master Leonard is justifiably famous.

Exhilarating old-school crime fiction that the late, great John D. MacDonald, Dashiell Hammett, James M. Cain, and Robert Parker would have been proud to call their own, Unknown Man #89 is a gem—nothing less than we’d expect from the man who created the incomparable U.S. Marshal Raylan Givens of the hit TV series Justified.