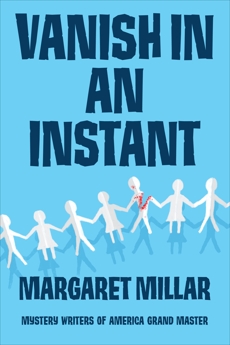 Vanish in an Instant

Synopsis: In this classic noir tale of blurred guilt and flawed innocence, a cynical lawyer uncovers the desperate lives of a group connected only by a gruesome murder.

Eric Meecham is not an optimistic sort. An old-before-his-time lawyer, scratching out a living in courts and jail houses, he is no stranger to desperate cases and has little faith in anything or anyone. But his brand of existential nihilism isn’t without curiosity, and when he gets a chance to represent a local society woman who’s been arrested for murder under very scandalous circumstances, well, even he can’t help but be engaged.

Cold, austere, and used to having her way, Mrs. Hamilton is more than a little upset at having to travel 40 miles west of Detroit, in the dead of winter, to the small city of Arbana. But her careless daughter Virginia has landed herself in trouble again and Mrs. Hamilton will do anything to keep the family name out of a scandal. But she little understands the gravity of her daughter’s arrest. Virginia was found drunk and underclad in the midst of a white-out snow storm. She was also covered in blood. In a cottage not too far away a married man, father of two, lay brutally stabbed to death.

Earl Loftus is the definition of a hard luck case. Broke and terminally ill, Earl’s life has been one tragedy after another. But the spark of a thoughtful intellect still gleams in his eyes and when Loftus comes forward to confess to the crime that Virginia is accused of, Eric Meecham is instantly skeptical. Could a man like Loftus actually commit such an act? The more Meecham interviews Loftus, the less he thinks it’s possible.