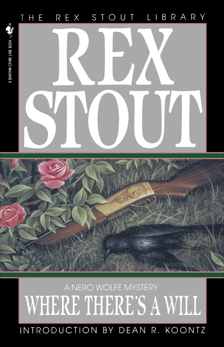 Where There's a Will

Synopsis: Why did the late multimillionaire Noel Hawthorne leave his sisters, April, May, and June, a peach, a pear, and an apple? Why did he will the bulk of his considerable estate to a woman who was most definitely not his wife? Now Nero Wolfe, able, astute, and unscrupulous detective that he is, must get to the bottom of a will that’s left a whirlpool of menace . . . and a legacy of murder that’s about to be fulfilled.

“It is always a treat to read a Nero Wolfe mystery. The man has entered our folklore.”—The New York Times Book Review

A grand master of the form, Rex Stout is one of America’s greatest mystery writers, and his literary creation Nero Wolfe is one of the greatest fictional detectives of all time. Together, Stout and Wolfe have entertained—and puzzled—millions of mystery fans around the world. Now, with his perambulatory man-about-town, Archie Goodwin, the arrogant, gourmandizing, sedentary sleuth is back in the original seventy-three cases of crime and detection written by the inimitable master himself, Rex Stout.