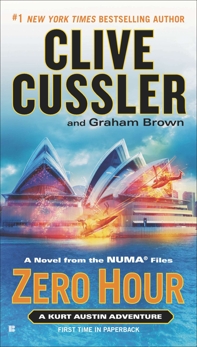 Synopsis: Kurt Austin and the NUMA crew must stop a vengeful scientist from tearing apart the very surface of the earth in this fast-paced installment in the #1 New York Times-bestselling series.

It is called zero-point energy—contained in all matter, it would become an unlimited resource for anyone able to tap into it. But so far, no one has. And even if they could, would they be able to contain it? Kurt Austin and his NUMA Special Assignments team are about to find out.

Kurt Austin is attending a symposium in Sydney, Australia, when he meets a stunning theoretical physicist named Hayley Anderson at the Opera House steps. The pair are interrupted by a boat chase raging across the harbor. But when Austin rushes to the scene, he’s intercepted by the head of the Australian Security Intelligence Organization.

Asked to step aside, Austin isn’t quite ready to let go of the chase, especially when he learns that Ms. Anderson is somehow connected. Disappearing documents and sudden, unexplained earthquakes suggest she may be in trouble. And the clues point to a scientist who may have achieved in the impossible, the construction of a zero-point energy machine.