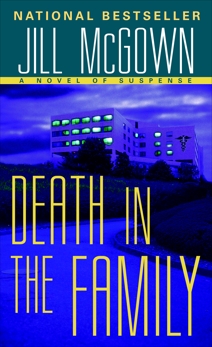 Death in the Family

Synopsis: With a plot that defies the most inspired second-guessing and with menace ticking quietly away on every page, Jill McGown’s Death in the Family firmly establishes her as a master of mystery and psychological suspense. This gritty, sophisticated novel is the twelfth in the author’s internationally acclaimed series starring Chief Detective Inspector Lloyd and his colleague and lover, Chief Detective Inspector Judy Hill.

Dean Fletcher had spent virtually all his twenty-four years doing things practically guaranteed to land him in trouble. But not until he fell for a blonde nymphet named Kayleigh Scott did he manage to totally ruin his life. Kayleigh had told him she was eighteen. In truth, she was not quite thirteen, and poor Dean was soon off to prison, a convicted sex offender, still smitten with his adolescent lover.

Now he’s finally free again, only to be ensnared by two crimes that have Lloyd pulling out what’s left of his hair. One is an infant kidnapping (the child was born within hours of Lloyd’s and Judy’s own baby, Charlotte); the other is the murder of Kayleigh’s mother, Lesley, on the very eve of the family’s sudden move to Australia.

Fortunately, Lloyd thinks he hears the ring of truth in Dean’s protestations of innocence. He is extremely curious about Lesley’s new lover, Ian, who has jumped headfirst into another relationship, and her old lover, Phil, whose world she had destroyed. And for all her air of placid innocence, Kayleigh herself isn’t above suspicion.

With Judy out on maternity leave, Lloyd is obliged to pick his way alone through the minefield of birth, death, murder, and domestic evil. Death in the Family is a novel of uncanny power and chilling credibility.