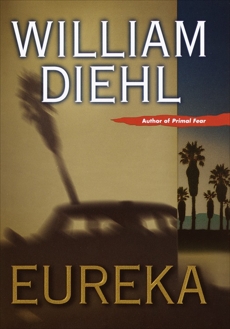 Synopsis: Eureka. It’s what you say when you strike gold. It’s also a town in California where the truth might be buried forever.

In New York Times bestselling author William Diehl’s thrilling, accomplished new novel, the seamy past of America’s most glamorous state lies in this deceptively peaceful area, one hundred miles north of Los Angeles. It was the lawless place from which young, rugged Thomas Culhane escaped to fight World War I. Now it’s a place where, two decades later, police detective Zeke Bannon investigates a death that seems a sad accident.

Until you look a bit closer.

The year is 1941. Verna Wilensky has been electrocuted in her bathtub, leaving a lower-middle-class life, no survivors, and a bank account packed with almost a hundred thousand dollars. Mysterious checks have consistently come to her for more than twenty years, most drawn from a bank in San Pietro, a town once known as Eureka.

Eureka was a town that used to be a bootlegger’s paradise and a gangster’s dream. Now it is the rebuilt metropolis where Sheriff Thomas Culhane is launching a bid to be the golden state’s next governor. But something just might threaten his ambitions. As Bannon digs deeper into Wilensky’s demise, he unearths a decades-old secret that starts in a shootout, builds to a bloodbath, and could end up within the upper echelons of California’s elite, forever changing the destiny of a state.

Rich in historical detail, complex in its connection between past and present, and filled with the nonstop action that are the hallmarks of this modern master, Eureka is an epic achievement of storytelling and suspense–William Diehl’s most extraordinary novel yet.