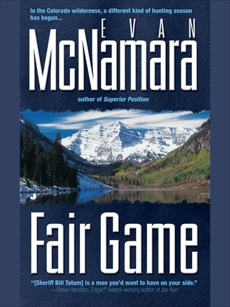 Synopsis: The case that inspired the major motion picture The Frozen Ground.

Robert Hansen was never someone you'd call normal. Bullied in his youth, he became a loner with emotional issues. After prison time for arson in his native Iowa, and arrests for shoplifting in the Minnesota Twin Cities, he moved with his young bride to Anchorage, Alaska, where he became a father of two, a successful businessman, a crack bush pilot, and a world-record holding big-game hunter. Hansen seemed happy enough, and was liked by most who knew him.

But no one knew the real Robert Hansen...or what he was capable of.

Between 1971 and 1983, Hansen went on a twisted rampage that would shock the public and authorities. Stalking his prey in the seedier corners of Anchorage, he kidnapped and assaulted dozens of women, murdering at least twenty, until one victim escaped his deadly clutches and alerted police. In Fair Game, journalist Bernard DuClos painstakingly reconstructs Robert Hansen’s twelve-year reign of terror, and the harrowing journey to his arrest and chilling confession.