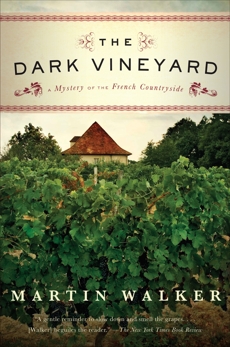 The Dark Vineyard: A Novel of the French Countryside

Synopsis: In this riveting sequel to Martin Walker’s internationally acclaimed novel Bruno, Chief of Police, some of France’s great pleasures—wine, passion and intrigue—converge in a dark chain of events that threaten the peaceful village of Saint-Denis.

Benoît (Bruno) Courrèges—devoted friend, cuisinier extraordinaire and the town’s only municipal policeman—rushes to the scene when a research station for genetically modified crops is burned down outside Saint-Denis. Bruno immediately suspects a group of fervent environmentalists who live nearby, but the fire is only the first in a string of mysteries centering on the region’s fertile soil.

Then a bevy of winemakers descends on Saint-Denis, competing for its land and spurring resentment among the villagers. Romances blossom. Hearts are broken. Some of the sensual pleasures of the town—a dinner of a truffle omelette and grilled bécasses, a community grape-crushing—provide an opportunity for both warm friendship and bitter hostilities to form. The town’s rivals—Max, an environmentalist who hopes to make organic wine; Jacqueline, a flirtatious, newly arrived Québécoise; and Fernando, the heir to an American wine fortune—act increasingly erratically. Events grow ever darker, culminating in two suspicious deaths, and Bruno finds that the problems of the present are never far from those of the past.

A splendid mystery—and a delectable serving of the pleasures of France.