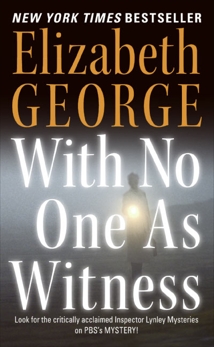 With No One As Witness

When an adolescent boy’s nude body is found draped over a tomb in a graveyard, the police recognize the work of a serial killer who’s been murdering boys in London. This is the killer’s fourth victim but the first to be white.

Hoping to avoid charges of institutionalized prejudice in their failure to pursue the earlier crimes to their conclusion, New Scotland Yard takes the case and hands it over to Lynley and his colleagues Detective Constable Barbara Havers and Detective Sergeant Winston Nkata. The killer is a psychopath who does not intend to be stopped. But a devastating tragedy within their ranks causes the police to fumble in their pursuit, which may bring more fatal consequences.