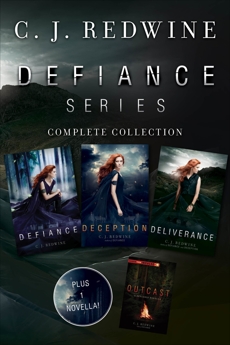 While the other girls in the walled city-state of Baalboden learn to sew and dance, Rachel Adams learns to track and hunt. While they bend like reeds to the will of their male Protectors, she uses hers for sparring practice. The Defiance series by C. J. Redwine is rich postapocalyptic YA fantasy perfect for fans of Graceling and Tamora Pierce. Includes all three novels and one novella in the series.

Defiance: When Rachel's father fails to return from a courier mission and is declared dead, the city's brutal Commander assigns Rachel a new Protector: her father's apprentice, Logan—the boy she declared her love to and who turned her down two years before. As Rachel and Logan battle their way through the Wasteland, stalked by a monster that can't be killed and an army of assassins out for blood, they discover romance, heartbreak, and a truth that will incite a war decades in the making.

Deception: Abandoning the ruins of their home to take their chances in the Wasteland, the group soon realizes their problems have only begun: an unknown killer —possibly inside their ranks—has begun picking off the survivors one by one. And Rachel and Logan must question whether the price of freedom may be too great—and whether they can make it out of the Wasteland alive.

Deliverance: Rachel has been kidnapped by enemy forces and is being taken to Rowansmark while her love, Logan, is imprisoned and awaiting trial, unable to leave Lankenshire. As uneasy alliances are tested and their enemies plot against them, will the two manage to find a way to rid their world of the tyrannical Commander and destroy the tech that controls the deadly Cursed One once and for all?