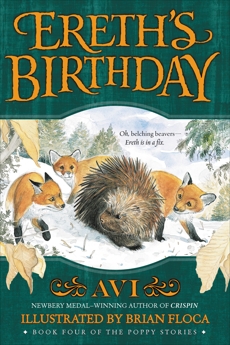 The fourth book in the beloved Poppy series by Newbery Medal–winning author Avi, with illustrations from Caldecott Medal–winning artist Brian Floca, is available as an ebook for the first time!

Erethizon Dorsatum—better known as Ereth, the self-centered, foul-tempered old porcupine—is having a birthday. And he fully expects his best friend Poppy, a deer mouse, to help him celebrate in a grand manner.

But Poppy has gone off somewhere with her husband, Rye, and it appears she has forgotten all about it. "Belching Beavers," says Ereth, "I am not angry!" (Though, perhaps he is—and more than just a little.)

Ereth knows his special occasion deserves a special treat—even if he has to get it for himself. And what treat could be more special than tasty salt? But the nearest salt is located deep in the forest, in a cabin occupied by fur hunters, who have set out traps to capture the Dimwood Forest animals. In one of the traps, Ereth finds Leaper the Fox—who, with her dying breath, begs the prickly porcupine to take care of her three boisterous young kits, Tumble, Nimble, and Flip. "Jellied walrus warts!" Ereth exclaims, but reluctantly agrees.

Certainly this day is not going as he planned—and it's only just the beginning! Not only does Ereth suddenly have a rambunctious new family to take care of, but he's being stalked by Marty the Fisher, the one creature in Dimwood Forest who can do him harm. And Bounder, the father of the three little foxes, remembers all too well the nose full of quills he got a while back from the grumpy old animal who now fancies himself the leader of the den. He too sets out to show Ereth who's boss.

Throw in an unexpected snowstorm, and all in all, it adds up to one birthday Ereth the porcupine is never going to forget, not even if he lives to be a hundred and twenty-two!

Will you be studying the history of the Church of Jesus Christ of Latter-day Saints in your homeschool this year? Knowing where we come from, learning about the sacrifices of those who came before, and gaining strength from their experiences and testimonies are all excellent reasons why you should. What better way for kids and […]

Posted on 6.Oct.21 in Homeschool Tips

Reading is the foundational skill for knowledge and learning. Knowing this, many homeschool parents naturally love reading and want to provide their students with a wealth of engaging reading material. While nothing beats the feeling of holding a book, turning the pages, scribbling notes in the margins, and folding the corners of well-loved passages, homeschool […]

If you’re a busy homeschool mom, you know how difficult it can be to find the time to teach your kids their required school subjects. Add in Bible study and you might be feeling a bit overwhelmed! That’s why finding ready-made King James Bible lesson plans can be such a blessing in your homeschool. Including […]