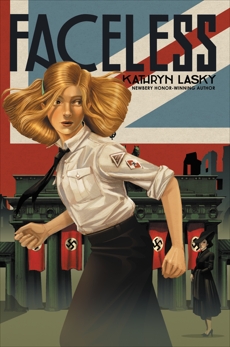 Newbery Honor winner Kathryn Lasky, author of the Guardians of Ga’hoole series, delivers a riveting adventure about young British spies on a secret mission in Germany in WWII.

Over the centuries, a small clan of spies called the Tabula Rasa has worked ceaselessly to fight oppression. They can pass unseen through enemy lines and “become” other people without being recognized. They are, essentially, faceless.

Alice and Louise Winfield are sisters and spies in the Tabula Rasa. They’re growing up in wartime England, where the threat of Nazi occupation is ever near. But Louise wants to live an ordinary life and leaves the agency. Now, as Alice faces her most dangerous assignment yet, she fears discovery, but, most of all, she fears losing her own sister.

This upper middle grade novel is a mix of espionage and historical adventure and will appeal to fans of Elizabeth Wein and Ruta Sepetys. Lasky masterfully spins a tale filled with mystery, suspense, and intrigue that will have readers hooked.

Faceless is also a springboard for the study of Word War II, with special interest to classrooms that would like to teach subjects such as Hitler, the Nazi regime, and anti-Nazi resistance.